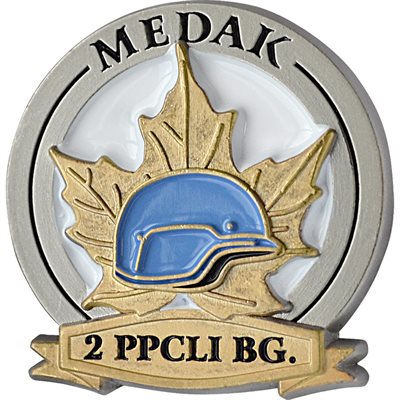 25 years past, September 1993, 2nd Battalion PPCLI was caught in a 14-day Croatian Army offensive. They endured 24 hours of artillery and mortar fire, and aggressively withstood 15 hours of directfire fights against RPGs, 20mm cannon and machine guns. In the end, the soldiers imposed their will on both the Croatian and Serbian armies, created a buffer zone and enforced a ceasefire. For its steadfastness and professionalism under fire, the unit was awarded one of the first Commander-in-Chief Unit Commendations.

In recognition of those who fought in the battle, The Royal Canadian Legion commissioned the production of this commemorative Battle of Medak Pocket pin. The cast metal pin includes hard enamel features and a jeweller’s clasp. LEST WE FORGET
$6.95