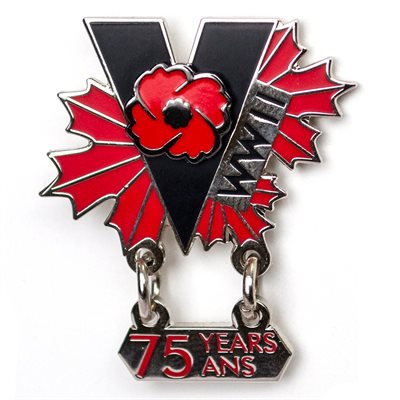 On September 2, 1945, the Second World War officially came to an end. The war was the largest, deadliest and most destructive in history. It had been fought on almost every continent and ocean.The number of military personnel involved on both sides numbered around 70 million. It is estimated that there were 75 million casualties, both military and civilian. Featuring the “V” for victory as the focal point, this lapel pin honours the 75th anniversary of the end of the Second World War. It is made to the exacting standards of quality that you have come to expect from the Supply Department. The Poppy is die-stamped separately, and then attached to the enamelled body of the pin. This pin features the popular clutch back attachment and comes attractively presented on a decorative, descriptive card.