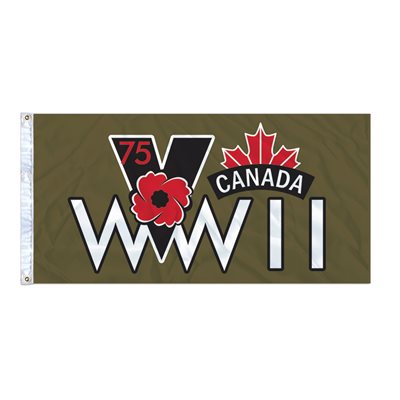 On September 2, 1945, the Second World War officially came to an end. The war was the largest, deadliest and most destructive in history. It had been fought on almost every continent and ocean. The number of military personnel involved on both sides numbered around 70 million. It is estimated that there were 75 million casualties, both military and civilian. This year we come together as a country and as people of the world, to celebrate the victories and to remember the lives lost during one of the most trying periods in modern human history.

Our devotion to provide you with high qualityflags continues with our new WWII Victory 75th Anniversary flag. Made from durable and fade resistant polyester, this Canadian made flag flies to commemorate the end of the Second World War. It is available at 6′ × 3′, and has grommets for outside use.
$39.95